Here are some new textboxes which look just a tad different in comparison to the old ones and are now based on a 9-sliced sprite.

The switches of the first area now actually switch the layout of the rooms when they are triggered in contrast to adding or removing three blocks at max. This small rework of the area has a reason, of course.

Similar to when I switched from Game Maker 8.1 to Game Maker: Studio 1.4, I decided to do this again and switch to the (kind of) recently released Game Maker Studio 2. Switching the game engine again allows me to rewrite IWBG as a whole and make things a lot cleaner and easier. If I feel fancy I'll try to add multiplayer as soon as possible. Anyway, current progress is around 1/4 of the game is ported to GMS2.

Hey there fellow game-developer (or reader)!
You might notice quite a different site-layout than whatever happened to be here last time. That's because I finally came around to redesigning the page to actually look like something you can call a dev-blog instead of something which just listed random entries of stuff and screenshots!
This also means that there may be updates to this blog (might even be regular updates?). I have a few things to show off, because my game made progress in those two years of inactivity on the blog.

Also, a brand new feature on this blog is, that the entries are actually entries which can be linked to (by pressing on the title and then copying the link for example) and the filtering should feel a bit smoother (which can be done by pressing on the tag in the upper left hand corner, which will only show entries with said tag).

The Kid is getting himself some treatment and has some bigger weapon in his pocket. But I don't think it will last longer than himself, to be honest...

Something something downtime, something something new content, something something HAPPY NEW YEAR.
Yeah, it's been a while. But I did something! I'm still working on a new version and it is possible that it will be released this year actually. New features include a kind-of-prototype-ish multiplayer, a new boss, a map, actual difficulty differences and more. Anyway, you can see one of those new features above, the pausemenu has been rewritten to also show the map (yes, a map system has also been added). 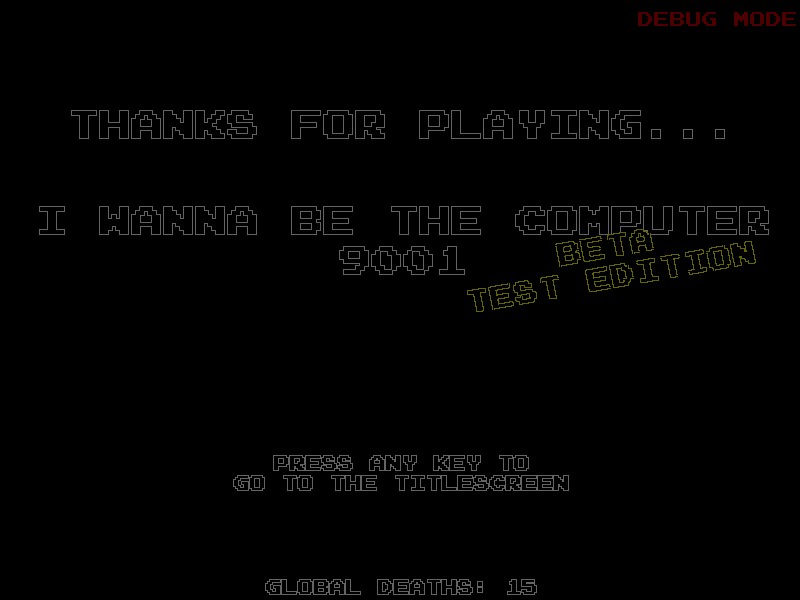 Finally, after... decades and some more years of waiting and development, I made a version of I wanna beat GraMMa, that you can finally download. Also, it features a changelog, so, even if you haven't played older versions, you can see what's new. Anyway, have fun! (You can either click on the image or here to start the download.)

That's a teaser out of the current changelog I'm using to keep track of tasks I accomplished per version and still have to do. So yeah, the next (and really official) version of "I wanna beat GraMMa" or "I wanna be the Computer 9001" will have all of this stuff in it. You probably won't even notice anything.
Anyway, talking about next versions, I do have a release date in mind, but I'm not gonna promise anything. It will come out soon, that should be enough information.

And today I'm here to show you the new conveyor belts I implemented, they are beautiful, aren't the... oh, what the hell is that other thing in the image which stops the conveyor belts from moving?! Uh.. I'll just ignore it...

...only six month since the last entry? That's alright... or so.
Anyway, I added a new gimmick and wanted to show it, so here it is. It is unpassable. ...maybe.

Also, this blog has now been updated to show the corresponding game the entry is dedicated to on the top left and it has its own URL now.

Wow, a new entry? What's happening? Is this real life?
Yes, it is. I got some free time and started working on the game again. I finally finished the console's rework. And the video above shows the basic functionality of it. It can be activated in the options menu and can also be used by everyone.
The name of the game is not final, by the way.

Something different today. A little video of me clearing one of the rooms of the third area.
Note: This DOES NOT belong to IWBTC2. It is another game. I am currently working on a site for it and gonna transfer everything belonging to it onto the other blog then. I would say IWBTC2 is dead, but maybe I will continue it later.
Also, everything that can be seen there is subject to be changed.

Just a small update. I finally got conveyor belts to work properly. Finally done with those exams (for one month at least). Now I have time to get back into business. Any, yeah, I worked on two big things.
The first thing is the song stone. In the post of August 17th I talked about the way how you will be able to find the songs. And I decided that I will use those song stones to show and teach you the songs. Also, you can't play songs you haven't learned yet.
The second thing is the inventory screen. It is currently showing all the weapons and songs you have gathered throughout the whole game and have available to use. The songs will also be shown as notes if you press a key (but I still have to implement that).

One exam left. And something new regarding the ocarina. Just a small thing though. Now the message gets displayed in-game and it actually does something.
And please don't think, a song like this is going to be implemented. It is just for testing purposes. MAYBE something like this will be added.

Yes. I worked on something. Yesterday and today.
So, I'm really busy because of my exams, which I have to write the next few weeks. I wanted to work on my game more, but yea... anyway. I added a new secret item, as you can see. And it works like the ocarina of TLOZ: Ocarina of Time. Maybe you'll have to collect some songs or you can always play them, if you know them, but they will be hidden somewhere in the world.
And yes, by 'world' I mean a world you can move around in freely after you have been to these areas.

Finally I could do something! I have so much things to do for the university and nearly no time to do something with my game. But now I'm taking some time to work on some things again.
Also, no one likes Toad:

I added new animations for the portal to the NES-area. Well... you could say, I have been playing too much Bioshock Infinite lately.

Again, it's me working on the Mega Man Engine, like the day before yesterday.

Well... it's nothing related to my game, really. But I just wanted to record something I program. So, here you have a timelapse of aprox. 2 hours in 20 minutes. It's about a pause menu of my megaman engine I'm going to show you soon, but you can also see somethings in the video already.

Yea, that's a new main menu, written in one day. :p I did this, because I wanted to have more save slots and also a menu, which can be controlled by the keyboard. So this happened.

Finally I have some free time left to add new things to my game. And one of those is shown above. As you can see, I added "walk-through"-able (<- THAT is definitely not correct english, but whatever) terrain.

But there also are some bad news. As my Game Maker 8.1 and lower won't work anymore, because my game loses fps over time, no matter what I do, I switched to Game Maker Studio. That was around 2 months ago, I didn't have time to post any updates due to University. But I had to remake my whole game (again...), so it'll be delayed again. On the other hand, I now could correct some issues the game had and fix (but also add) some bugs.

All in all, I'll work on the game as usual, but it will take a whole lot more time...

Just started modelling an engine based on the old Zelda I for the NES. I did not show all the features in the gif. The HUD is dynamic (rupees, bombs, keys, hearts) but the map is missing. Also, you can not use the sword yet.

Well, it didn't always look that nice. I had a few problems...

but then it finally looked like it was supposed to be.

For all of those, who played my game until that point, should know, that MasterR only had three phases. I thought those weren't enough (I'm becoming Solgryn 2.0). I am adding one more phase, but I'll remove the part in the airship at the end or make it easier/shorter.
There are also some references in the gif already.

He works a lot like himself in Megaman. Can only be hit during his eye is open. But he is throwing the ball with gravity.

Yea...well...not working quite as well as I wanted it to work.

Now finally a download link of the seventh alpha is available. Buuuuut it's 100MB, so it could take a while... Anyway, have fun! I added a stage selection. Makes more sense than the "story" I had going on.
This is one of the heavier gifs right here.

The IWBTG-area might have a few climate problems after all those years. A whole new level of control changing! Now it even displays the button which is currently being used and all that in a neat blue box.

Take a look at these (probably) bug-free ladders!

Finally fixed all the errors with the lasers. Now have fun getting toasted. But these lasers, other than Quickman's, change in a fixed time interval.

Once upon a time... a young programmer wanted to understand how to properly implement UI and/or dialog engines but he still doesn't understand it to this day, so there's a.. weird dialog engine.

If you ever played Mega Man 2 then you might be familiar with the instant-death lasers in Quickman's stage. Well, I added similar lasers, but those are nothing new in my game, actually.

I just replaced the whole old Windows-engine with that one. It's made from scratch and adds new features, such as a context-menu for example.

Now, take that! I think it's way too easy to beat him, but... maybe that's a good thing?

Just wanted to show some amazing effects. The castle of 1-4 is nearly finished.